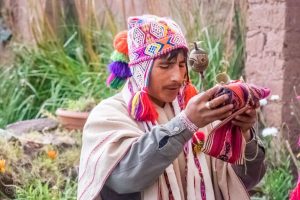 At the highest altitudes in the Andes Mountains in Peru, live a group of indigenous Indians called the Q’eros. They are the direct descendants of the ancient Incan people who were invaded by the Spanish Conquistadors in the 1500’s. During that time, many of the Incan people were forced into labor in the gold and silver mines by the Spanish, but a few others escaped to the “villages in the clouds” in the refuge of the holy mountains (apus). These people survived and safe-guarded much of their sacred knowledge, keeping it intact over the centuries.

Other Incan tribes, who stayed behind, were strongly encouraged to forget their traditions and convert to Western ideologies of the church and other cultural views. The Q’eros have miraculously been able to preserve and orally pass on their sacred Inca healing traditions and ceremonies from one generation to the next. They have successfully been able to keep drawing on the wisdom of the advanced Incan societies that had previously flourished for thousands of years. Thy have also been able to continue developing thee advanced techniques in healing, divination, ceremony and kepta strong connection with the spirits of their homeland.

Inca Prophesy – To Bring Back Balance in Nature and Mother Earth 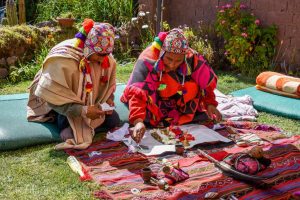 In recent years, the paqos or Inca shamans (holy men and women, healers, priests and specialists in medicine) have seen their sacred mountain glaciers begin to melt. This was a sign from an ancient prophecy that they should come down from the mountains to share their wisdom with Western civilization. Mother Earth (Pachamama) was in dire need for people to know what to do to bring back the balance in nature and society that has rapidly deteriorated in the past century.

Despite the way their ancestors were treated, they do not hold a grudge nor do they hold onto any anger. The reaction of some other indigenous peoples has understandably been to keep their traditions away from those who wish to know about them. But the Q’ero people believe they should share their wisdom and energy because it is crucial for the preservation of life on the planet and our health.

Many Westerners have lost touch with nature, in general and lost all meaning in life, along with their peace of mind, wellness and true purpose as souls. The Q’ero Inca shamans help to teach us how to live in balance and give back to Mother Nature in reciprocity (ayni) and with each other. The Q’ero do not see themselves as separate from each other as we do int he West. They realize deeply that we are one with nature, with spirit and other people. Nature has so much to teach us, if we only know how to listen, respect and take time to love. The Q’eros see the divine in all nature and speak to each mountain, rock, plant, river animal and human life with attentiveness an care.

They willingly and loving share this with us, provide us beautiful ceremonies and sweet healings. We are fortunate to have one of their highest “holy men” Luis be a part of our sacred ceremonies.

They live in very basic accommodations and have no other means of income outside of selling the potatoes they grow  – and selling their beautiful handmade crafts.

Below are photos of Luis’s village, his home and the school. 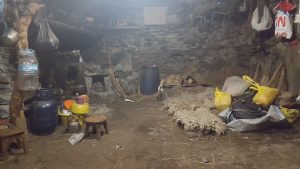 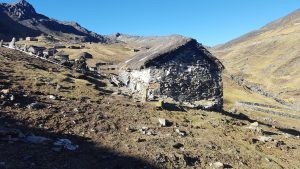 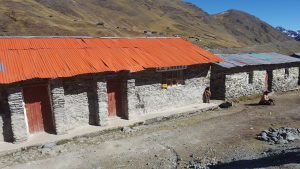 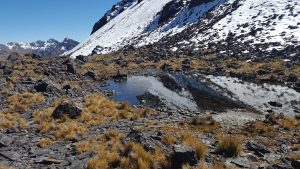